This build experienced a couple of buffs in 3.3:

1. The Ground Slam buff is making Ground Slam a viable choice now.
2. Being able to generate Vaal Souls during boss fights makes Vaal Haste more consistent. Although GGG nerfed it a bit, it’s still a good gem.
3. Endurance Charge on Melee Stun Support now gives 4% more damage per charge instead of 3%. This is a minor buff to this build.
4. The “always attack without moving” toggle button is a significant quality of life buff. Now Empire’s Grasp is less important as we can set “always attack without moving” on for every skill except Heavy Strike. 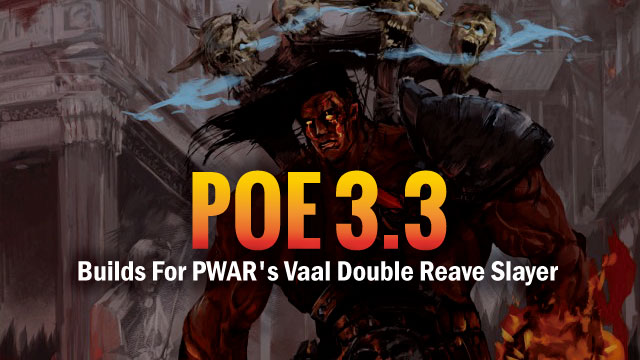 -Average life/defenses
-Uses basically all of your skill bars, need above 40 IQ to manage buttons
-Can’t do ELE reflect with shaper stat stick

Vaal Double Strike:
The build incorporates the newly buffed Vaal Double Strike, which is basically now going to be auto-include in practically every melee build that can bleed. The damage of 4 dudes shreds practically everything in under 5 seconds (even without you attacking, for standard bosses) with flask up. Because of this, this build focuses on Skill Duration to extend the duration our gang is out for prolonged gangbang sessions. Most things die long before that, but for tougher bosses with phases it does help out not being left with just Reave/Double strike to tickle the boss down, as well as generally making clearing even faster.

With a modest sacrifice of 3 pts and 2 jewel sockets, you practically double Vaal double strike’s dmg since they stay out for near twice as long (11.1 sec), which is helpful in some (important) situations as mentioned. Haste also last near 10 sec which is nice. With the prolonged skill duration you can (almost) go back to back Vaal uses if you kill fast enough, as the skill duration extends past the actual soul gain prevention window.

Both are good classes. Champ provides better upfront defense and single target damage, especially with adrenaline. Slayer provides better Aoe and the leech sorta really helps out and enables you to be able to run damage on full life gem comfortably unlike champ. Can’t go wrong with either, it’s just one provides better Clear, one is a better boss killer if you work in adrenaline.

The double strike also got a similar buff (added Phys against bleeding enemies) and is fairly crazy too. And Vaal double and normal double being on the same gem now helps a ton with gem management. However, clear wise, it still felt a bit lagging behind even with slayer and ancestral call, which is why I incorporate Reave into the build as our clear instead, which melts the entire screen with increase area of effect gem. Now you can just run this build as a 6-link Reave + 4-link VDS, or you can do two gem swaps to Vaal double strike for full 6-link VDS deeps against the important bosses like shaper/guardians. And since we’re Slayer, even if you gem for single target only, you still get some splash to handle ads.

Ascendancy:
For leveling go down left lane in Tree to get Razor’s Edge and Blade master as soon as possible, the bleed chance will help. the proceed to the right of the tree to get vaal pact and crit nodes. Again for the tree use the PoB Link right under the cover image of this post.

Minor Gem explanations:
CWDT – Summon Ice Golem in tomb fist. cwdt removes the need to constantly summon it. lv16 to both gems.
Leap Slam – Faster Attack – Blood Magic – Fortify = Gain fortify for dmg reduction. Blood magic allows you to spam it since you want to move fast without worrying about running out of mana. You might think BM goes against Damage on Full Life gem, it does, however by the time you leap slam into a pack of mons, you’ll leech back your missing life lost instantly and be at full life in time for your reave/double strike to gain the gems dmg bonus.

Likewise, with Blood Rage, we supposedly lose a life, but if you attack a bunch of mobs, due to the overleech from Slayer’s Brutal Fervour, we go to full life and stay at full life, out leeching the degen of blood rage. I’ve check the tooltip to make sure and I’m basically counted at full life even with leap slam and blood rage active for most of the time. The only time it drops a bit is long stretches of no mobs. Blood rage provides attack speed, frenzy charges, and even 2% life leech, so it’s a perfect fit for the build.

Need to get 3R/1G in starkonjha to use 4-link VDS, annoying to color.
Vulnerability = 30% chance to bleed @ 20/20
Razor’s Edge nodes provide 25% chance
Dragoon = 20% chance
So you’ll have 75% chance to bleed with a dragoon sword, 55 without. Since you’ll mostly be using Reave, you can run bloodlust for VDS in 4-link for more dmg for your clones.

Here’s a Waterways Run with Enfeeble+Double Boss as a Demonstration:

Generally, they’re not worth the trouble for reasons that happen to be adequate within the lengthy run. Even though they’re useful for players who might know absolutely nothing regarding the game. For one of the most aspect, they are learning tools for beginners to ease them in to the game. For much more Path of Exile 3.3 Builds, you’ll be able to take a look at U4gm.com. Just a reminder: you can get 5% coupon code for free in the reps if you Buy Poe Currency order from this article.