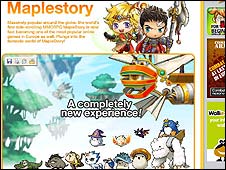 A woman has been arrested in Japan after she allegedly killed her virtual husband in a popular video game.

The 43-year-old was reportedly furious at finding herself suddenly divorced in the online game Maplestory.

Police say she illegally accessed log-in details of the man playing her husband, and killed off his character.

The woman, a piano teacher, is in jail in Sapporo waiting to learn if she faces charges of illegally accessing a computer and manipulating data.

She was arrested on Wednesday and taken 620 miles (1,000 km) from her home in southern Miyazaki to Sapporo – where her “husband”, a 33-year-old office worker lives.

If charged with the offences, and convicted, she faces up to five years in prison and a fine of up to $5,000.

‘So angry’
A Sapporo police official, according to the Associated Press news agency, said the woman had used the man’s ID and password to log in to the game last May to carry out the virtual murder.

“I was suddenly divorced, without a word of warning. That made me so angry,” she was quoted by the official as telling investigators.

Maplestory is a Korean-made game, which has grown in popularity around the world but has a strong fan base in the Far East.

The game centres on defeating monsters, but players can also engage in social activities and relationships – including marriages – through their digital characters, called avatars.